"Katrina and the Raves" 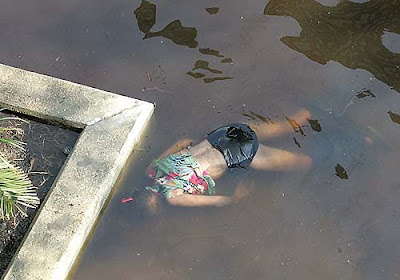 ..."Not so much as a syllable of complaint, censure or even constructive criticism from the neoconservative hyenas about 1800 dead, billions in damage and the virtual disappearance and subsequent martial takeover of one of America’s most historic, colorful and vibrant cities.

Not even a joke about “Lake George” or “Row vs. Wade” in twenty foot-high fetid standing floodwater, not a breath mentioned of Bush demoting FEMA from a once-competent cabinet-level agency ably run by Clinton appointee James Lee Witt and made a useless appendage to a bloated and useless host called Homeland Security.

Then again, the results speak for themselves: The poor that have been allowed to come back from the FEMA-run internment camps and formaldehyde-impregnated trailers for which they’ll have to start paying rent next year have been priced out of decent housing, priced out of decent schools for their kids, have seen whatever work they can pick up cleaning up their own city snapped up by Halliburton, that Bush tried to get around the 1931 Bacon Davis prevailing wage act, that their water system’s been privatized and that Bush is now trying to get back $485,000,000, almost a half a billion dollars back, from these still largely jobless and homeless people because, with FEMA, it’s feast or famine.

And the likes of Viguerie don’t hate Karl Rove because he failed as the face-saving Czar of New Orleans’ “reconstruction.”

And they’re not angry at Bush for rolling up record deficits that would bankrupt a dozen Bill Gates with endless tax cuts and that he’s got the chutzpah to hit Congress up for an extra $50,000,000,000 for his bloody oil war and, by doing so, is essentially saying, “Congress is my bitch.”

You see, according the real dick-twisters on the Far Right, it’s because, after nearly 75 years, they never actually quite did away with that damnable welfare state that they’d inherited from that evil, wicked liberal FDR, someone whose worth to certain historically-challenged Republicans is solely in leading us to victory in a war that can used to analogize the war on terror.

It’s because the rich, according to Scott Hodge at CPAC, still aren’t rich enough.

They hate Bush for his seeming conciliatory immigration bill, therefore in not keeping America as white as it once was, in not being able to singlehandedly reverse a national trend of Hispanics being the fastest-growing minority in America. They hate Bush because he bloating the government beyond all manageable size in their view disqualifies us from the cherished oligarchy of which they wistfully dream.

They hate Karl Rove for failing the party, for interrupting his string of consecutive successful thrown elections, for not fulfilling on his open promise of a 4th Reich of a thousand years that barely lasted four, because George couldn’t quite pull off opening up that string of McMocracies across the Middle East packed with right wing ideological puppets and got, instead, an unshaved version of George W. Bush in Nouri al-Maliki.

They hate Alberto Gonzales for not firing enough US attorneys, for not being able to help pack the Justice Department with 93 solidly and certifiably insane Liberty Law School grads and turning the DOJ into the Democrat-hunting pogrom that they needed. They hate him for looking like a flannel-tongued fool on Quaaludes testifying to the Senate about the once-secret NSA wiretapping program and for bumbling into John Ashcroft’s ICU room in front of witnesses.

They are all traitors to the cause, every one of them.

But the 1800 that Katrina killed, the hundreds of thousands that she’d displaced? Well, they don’t seem to have a problem with that."

Thank God some powerful people still have their priorities in order.

Gleaned from:
Welcome to Pottersville: Katrina and the Raves

Securities used by institutional borrowers to obtain loans and leverage more Enronic rapine of pension funds are being exposed daily as worthless chits ... but don't worry, the Fed is here to rescue fearless and lawless financial adventurers.

As the Fed cut discount rates today, breathless borrowers hanging at the end of their margin will get a brief respite in looser credit ... while the foundations of their trust in the viability of the system are disolving underfoot.

Billions of funny money injected into the system last week and coffin nails provided today in a desperate last move to prevent the inevitable.
Posted by Alain Zola at 23:57 No comments:

Another kind of Surge before the Fall

"...under the new dispensation when the netherworld has become the main show and the compensatory human rights rhetoric an ever more strident exercise in hypocrisy, legitimacy seems to come from impunity.

And the American political class has no more patience with divergent interests, claims of independent judgment, or "decent respect for the opinion of mankind".

Pelosi has met her Georgerloo ...

By all accounts, president George Bush has violated his oath to the Constitution by declaring himself and his administration neither answerable nor accountable to anyone he does not sanction.

Madame Pelosi, first woman to occupy the powerful post of Speaker of the House, will also be the first sworn constitutional officer to witness and disregard a blatant rape of our Constitution.

One may reasonable assume that madame Pelosi is more concerned with political gaming than with saving this rapidly crumbling democracy.

Nancy Pelosi embedded in not so funny Bushiness

Anyone else hear the barbarians laughing at her from the Supreme White House?
Posted by Alain Zola at 23:54 No comments:

A few more atrocities, anyone?

Let's face it. If you combined the intellectual quotient of a Bush, a Rumsfeld and of all those imperious neocons who bask in their predatory delusions , you could not begin to solve the conundrum irremediably contrived by America's enronic corporate and political elites.

They and they alone have dragged this nation into the maelstrom of dead-end régime changes; they, alone, are recreating today's drug dealing Afghanistan; they, alone are feeding the cause of fundamentalist extremism in blood-soaked Iraq; and these aberrations are but hypnotic distractions.

These would-be conquerors now have their sclerotic vision fixed on Iran.

Roped into a tug of war with emerging power blocs who compete ever more aggressively for the planet's diminishing oil supplies, stripped of the international legitimacy which the USA once briefly claimed as a world leader, juggling with an exhausted military manpower, the Bushist neocons can neither abandon the oil fields of the Middle-East nor remain embroiled in the suicidal politico-religious Islamic confrontation which its military industrial profiteers have provoked.

Don't be surprised if these international thugs now resort to nuclear weaponry in order to try and delay their inevitable rout.

Given the Bushists's penchant for illicit, illegitimate and illegal expedients, nuclear atrocities may well be the next escalation in depravity to which they resort in a frantic search for a way out of their own contrived nightmare.
Posted by Alain Zola at 23:51 No comments:

Uneasy shuffling among the imperious ranks

"Bonhomie is officially back in transatlantic relations after George Bush's fence-mending trip to Europe - but a fresh divisive crisis could be looming over the EU's determination to lift its 14-year arms embargo on China."

"While Japan's Middle Eastern oil supplies are shipped through the Taiwan Straits, US concerns about Chinese rising power causes "deep concern" about any "change in the balance of relations between China and Taiwan".

The US Treasury would go belly-up if either Japan or China decide to call in their markers!

"The US could retaliate by curbing technology exchanges with the European Union"
Watch Old Europe retaliate and stop exporting their Einsteins and Von Brauns.

The U.K.'s Gordon Brown, touting for business in Beijing and Shanghai while Mr Bush is in Brussels...

Round and round the Bushy-Go-Round...
Posted by Alain Zola at 23:48 No comments: